Madagascar is a huge island and a country located off the south-eastern coast of Africa. It is home to thousands of endemic animal species like lemurs, as well as rainforests, beaches and reefs. Close to the bustling capital, Antananarivo, is Ambohimanga Hill, a collection of royal palaces and cemeteries, as well as Avenue des Baobabs, a dirt road lined with giant trees that are centuries old.

Tourism is one of the most important economic activities for Madagascar. It is one of the country’s primary sources of foreign currency.

Cultural tourism focuses on the country’s natural parks. The fauna and flora of Madagascar are indeed the best preserved in the world. The Big Island is indeed home to many endemic species, the best known of which is the lemur. In the Makay Massif, located in the center-west of the island, more than 2,000 animal and plant species were identified during a scientific expedition, including more than 80 new species.

Sports tourism is also developing. Many water sports enthusiasts meet in the vicinity of Antsiranana (Diégo-Suarez) or Nosy-Be in the North of the country, to practice kitesurfing and windsurfing. The annual windy season lasts from late March to late November. It is among the longest and strongest in the world.

A crossroads of Asia and Africa. The first inhabitants arrived about 500 BC not from Africa through the Mozambique Channel, but across the Indian Ocean, from Borneo, into what is now Indonesia. The capital Antananarivo, located at an altitude of 1300m, can be called more simply “Tana”. Despite its large size (587,000 km2), the island has only a very modest rail network of 854 km. Madagascar was a pirate’s paradise between the 17th and 18th centuries. The first anarchist colony in history was founded here at the end of the 17th century …

The culture of Madagascar refers first of all to the patent cultural practices of its vast population. This culture reflects the different waves of settlement over the centuries. Nevertheless, all these Malagasy with heterogeneous cultures observe the same gesture of respect when they cross paths: they bow.

This country of about 26 million inhabitants is therefore culturally very diverse. It has no less than 18 distinct ethnicities, speaking languages of Austronesian origin.

Circumcision is a real tradition throughout the island but with different methods depending on the region. This is a traditional initiatory rite that is still alive. Individual on the Hauts-Plateaux, this rite is practiced collectively in the south-east, where it sometimes gives rise to festivities that last a month.

The land where the dead are returned

Madagascar is the only country where “FAMADIHANA or turning the dead” is practiced. In the Highlands, although it is lost on account of its cost, the famadihana season runs from June to September. On the program of these festivities, we drink, we eat, we dance and we sacrifice at least one zebu.

The feast ends with the opening of the family tomb and the ancestors “returned” to be dressed in a new shroud made of wild silk. The Malagasy people, particularly those of the Hauts-Plateaux, bury their dead in these shrouds called “Lambamena”.

The Malagasy people worship ancestors. Of course, this is not the only culture in the world that practices rituals linked to ancestors, but this cult has given rise to a funerary art of great richness that is part of an already very varied local craft.

The zebu is a sign of wealth and therefore it is very important. Along with rice, it is one of the two symbols of the country. These cattle, whose meat is consumed in abundance, are almost as numerous as the human population. 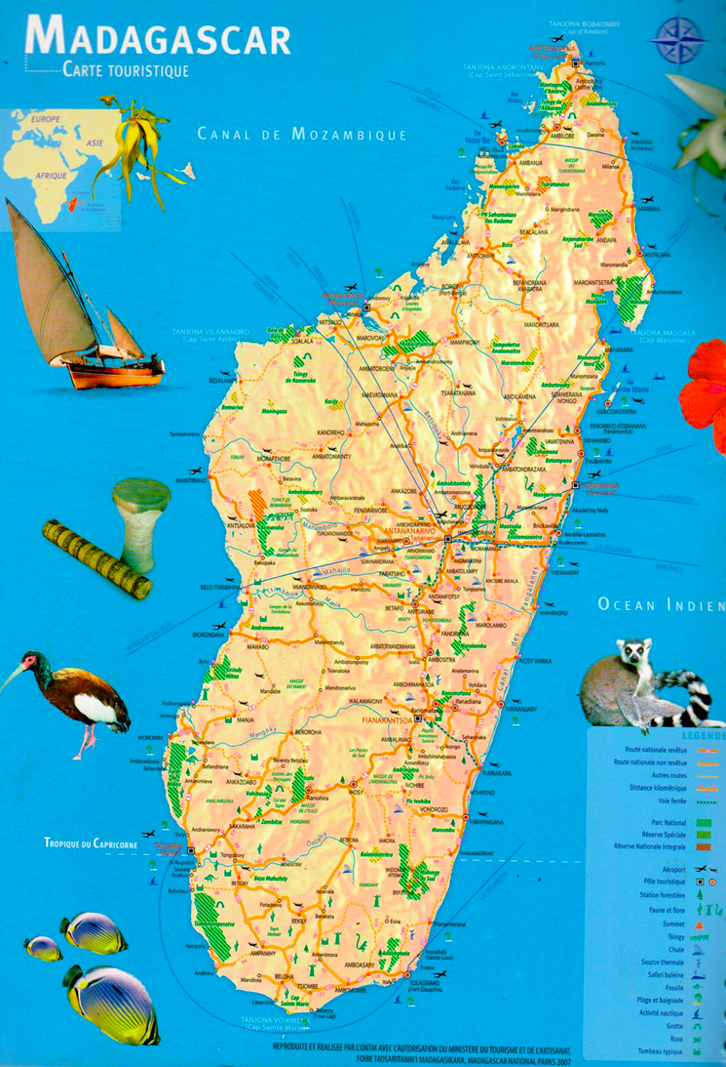